"I love fresh ideas about everything". Adriana Siso founded her contemporary industrial design store in 2002 in Santa Fe, NM. With a background in Fine Arts, Adriana has been an innovator, bringing to the Santa Fe area, original and unique industrial design products by some of the most creative design firms in the world.

Is it possible to let a first sketch become an object, to design directly onto space?  The four FRONT members have developed a method to materialize freehand sketches. They make it possible by using a unique system where two advanced techniques are combined. Pen strokes made in the air are recorded with Motion Capture and become 3D digital files; these are then materialized through Rapid Prototyping into real pieces of furniture, shown first at Art Basel Miami / Design with Barry Friedman Gallery Ltd ( New York ) and Tokyo Design Week.   Source: Front Projects.

The conceptual design group initiated the experience for Sketch Furniture from drawing in space with light, from there devised how to translate the gesture into an actual graphic representation and further into a completed 3-d object.  FRONT is known to have created designs with impossible characteristics that seem to defy the laws of nature. In the Magic collection, inspired by magician’s props, design pieces are made to make other objects disappear, a lamp that levitates, a chair balances on one leg and a chest of drawers separate and float away.  Some of their themes have materialized around animals, like in Designed By Animals, where rodents or snakes imprint materials by their natural behavior, markings that are later cast into other materials to become completed pieces.

Front designed the famous Rabbit, Pig, and Horse lamps for Moooi, as well as Blow Away Vase.  They have also designed for Droog Design, Vlaemsch, and others.  They won the 2007 Designer Of The Future Award, at Design Miami/ Basel. 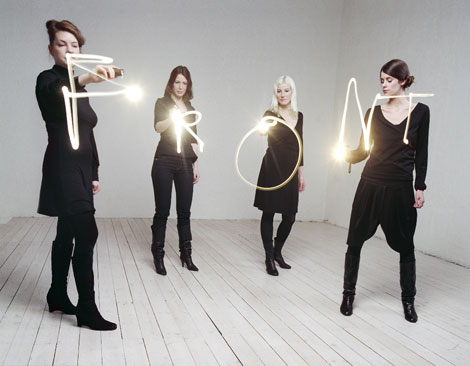 Front members met while students in the Industrial design program at the University College of Arts, Crafts and Design (Konstfack) in Stockholm, Sweden:  Sofia Lagerkvist, Charlotte von der Lancken, Anna Lindgren, and Katja Sävström. The company was established in Stockholm in February 2003.

GOOD FOR THE PLANET

Based in Duluth, MN, LOLL DESIGNS is a designer/manufacturer of durable, all-weather, outdoor furniture and accessories made with recycled plastic – mostly from single­ use milk jugs. Using thoughtful, original designs and unique materials, Loll creates innovative, fun, and high­ quality products proudly crafted in the USA.

We are passionately curious about 21st Century dialogues on innovation. We welcome inspiration from art, design, science & technology, and business. In general, we resonate with fresh and creative thinking, as we make our way to a fast-changing new world of unimaginable breakthroughs.

Michael Jantzen has used architecture to conceive inventive ideas about how to manipulate and rediscover the built environment. Jantzen’s endlessly innovative objectives allude to the continuously shifting, fast-paced world we live in, and offer creative solutions to inhabit spaces that can change as we do, that are transformable, interactive, modular, and relocatable, and at the same time, beautiful.